The news is out – if you want to avoid a dinner party disaster, please keep Jon Snow out of your guest list. Tried and tested by Seth Meyers of Late Night, the dinner party was filled with an array of silent pauses and awkward glances. More than once, Meyers had to pull Snow politely aside to instil a short crash course on how to make friendly banter with his dinner party guests. 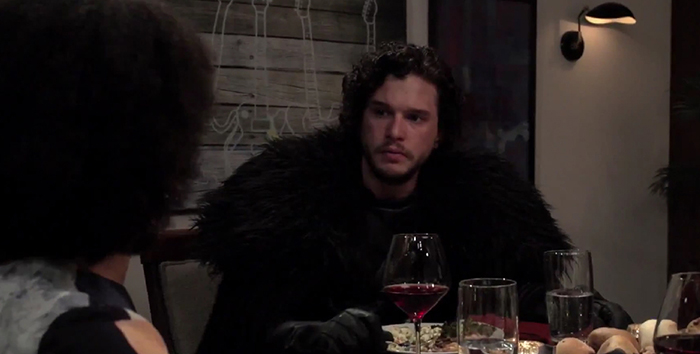 He might not have been the friendliest guest at Meyers' dinner party, but we like to keep our faith in the good of people. The dreamy Snow, with his chiselled features and tousled locks, cannot always be a terrible dinner guest…particularly not when he is feasting with the charming hosts of a BonAppetour dinner party!

With our bevy of genial and hospitable hosts in Italy, we are quite certain that the evening would not turn out to be a complete disaster, despite the myriad of warnings cautioning that the surly and taciturn Jon Snow makes for a terrible dinner party guest.

We cannot deny that it will present quite a challenge, for our hosts will be walking a tight rope when it comes to steering the flow of conversation. Judging by how Meyers' dinner party went, we advise the following: avoid discussions about the season (unless you want to be told in a deadpan manner that "winter is coming"), and do not make small talk about family. Questions about one's living location are fine, but only if you are well-versed in the geographical locations of the medieval Seven Kingdoms. If all topic starters fail, mildly suggest playing a game of charades.

There is one comforting thought – we are quite sure that the array of Italian delicacies prepared by our hosts, such as crisp pizzas and classic Roman delights, will please Snow's palate, even if he is accustomed to a medieval diet.

Dinner Party in the Tropics

Alternatively, what if we were to invite Jon Snow to a dinner party in the tropics, right smack in the bustling hub of Singapore?

We cannot quite imagine the well-built man feasting on local favourites – the sight of Snow tearing apart a prata with his leather gloved hands is quite an unimaginable thought. If we had to recommend a dining experience, we would suggest a signature local dish, chilli crabs, or a hearty serving of nasi tumpeng.

However, we can foresee a difficulty that is likely to arise. Would the man be able to survive the sweltering heat of Singapore? We do not think this is likely, particularly when he is cloaked under a thick fur coat meant to ward off the freezing cold. Well, we like to keep some back-up plans in store in cases of emergencies – if Snow ends up sufferring from a case of heat-induced appetite loss, perhaps a dainty session of English Hi-Tea might do…

Beer festivals around the world
Dining Customs From All Around the World
7 Incredibly Interesting Facts About Sushi That Yo...
Breakfasts Around The World

Travel Guide: Where to Eat Breakfast in Italy? 5 Handy Tips to Plan Your Dinner Party Menu
Scroll to top