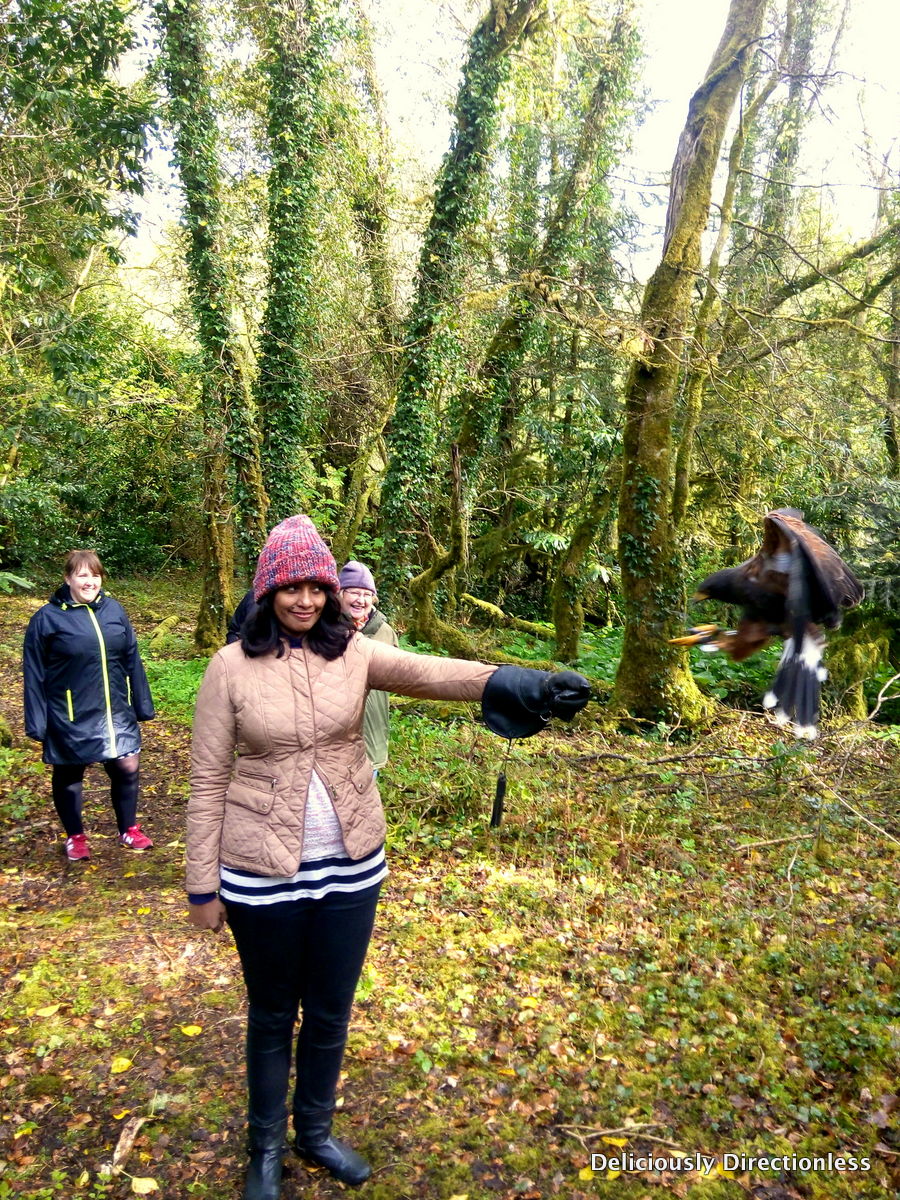 Aztec is looking at me menacingly and I'm already regretting taking him out for a walk. I'm not particularly good with animals (with the exception of horses), and when Aztec lets out a loud scream, I'm ready to abandon the entire exercise. No, Aztec is not a furry, four-legged thing, but a nearly fully-grown Harris Hawk with giant flapping wings, and a razor sharp beak trained to rip small animals into pieces.
It is a cold, rainy day as I arrive into the sleepy town of Cong in County Mayo, Ireland. After tramping about the remains of the 13th-century Augustinian Cong Abbey, I head further to the sprawling estate of Ashford Castle.
Ashford Castle stands on the site of the 13th-century Castle of Cong; parts of the old castle still stand, and have been integrated into the current structure. The castle saw various changes of regimes and owners, and was expanded according to the architectural styles of the day. The current castle has soaring turrets, French chateau elements, Georgian windows, Victorian extensions and the like. Still there’s no denying the grandeur, especially when you drive through the estate and see the castle’s towers peeking through the trees, and then having it loom up ahead suddenly. Ashford Castle, now a luxury hotel, stands on the shore of Lough Corrib, and is surrounded by 350 acres of landscaped gardens and woodlands. 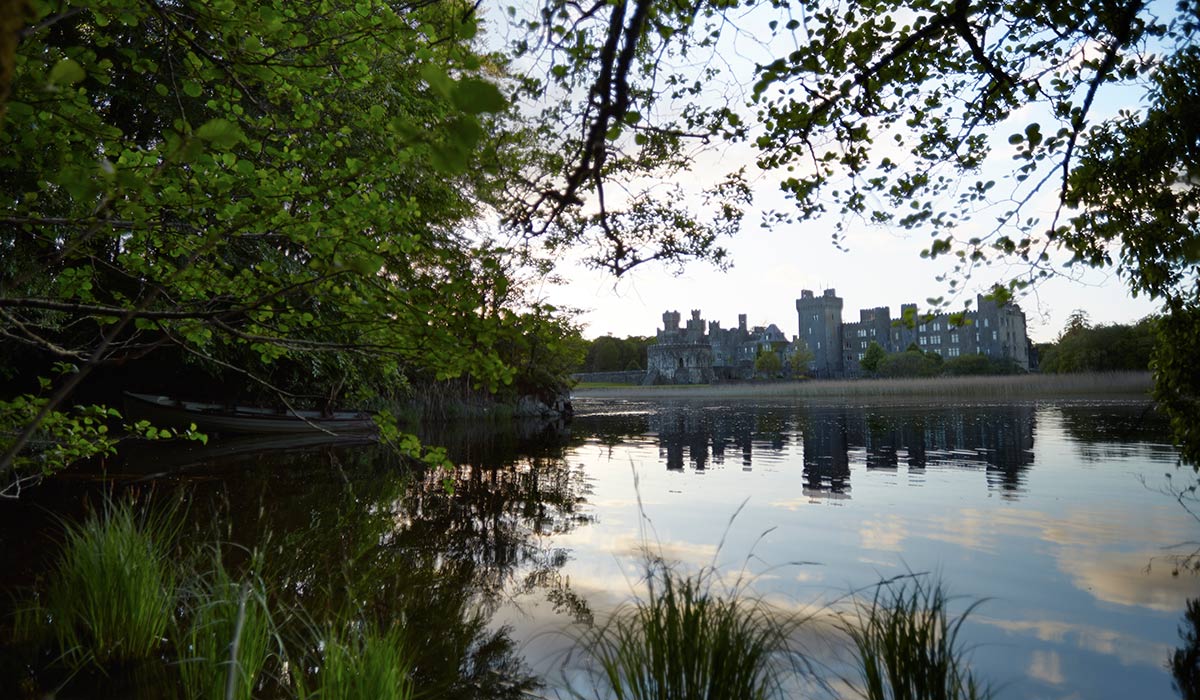 After a quick rest in my room, I head out in the hotel’s vintage saloon car (whose chauffeur is better dressed than I, complete with a top hat). The rain has mercifully stopped. We drive down the long driveway, past the golf course, and arrive at the Falconry School at Ashford Castle, which is the oldest in the country.
Falconry (the hunting of wild game with a trained bird of prey) has a long history in Ireland. The earliest reference to it has been made in a 7th-century Irish text. Later with the arrival of the Anglo-Normans in the 12th century, falconry became an established sport amongst the nobility. Since then Ireland has had a reputation for having the best hawks, which have always been a valuable commodity, and were also used as a form of rent payment.
At the school I meet Ed Coulson, one of the hawk minders and my guide for the day. We begin the tour by saying ‘hello’ to the school’s prized possession – Dingle, a European Eagle Owl who arrived as a baby in 1999 when the school started. Dingle is massive, at least a foot tall, with large amber eyes that stare at you disconcertingly. And he is gorgeous – with black and golden markings, and a white collar – he could proudly star in any of the Harry Potter movies! 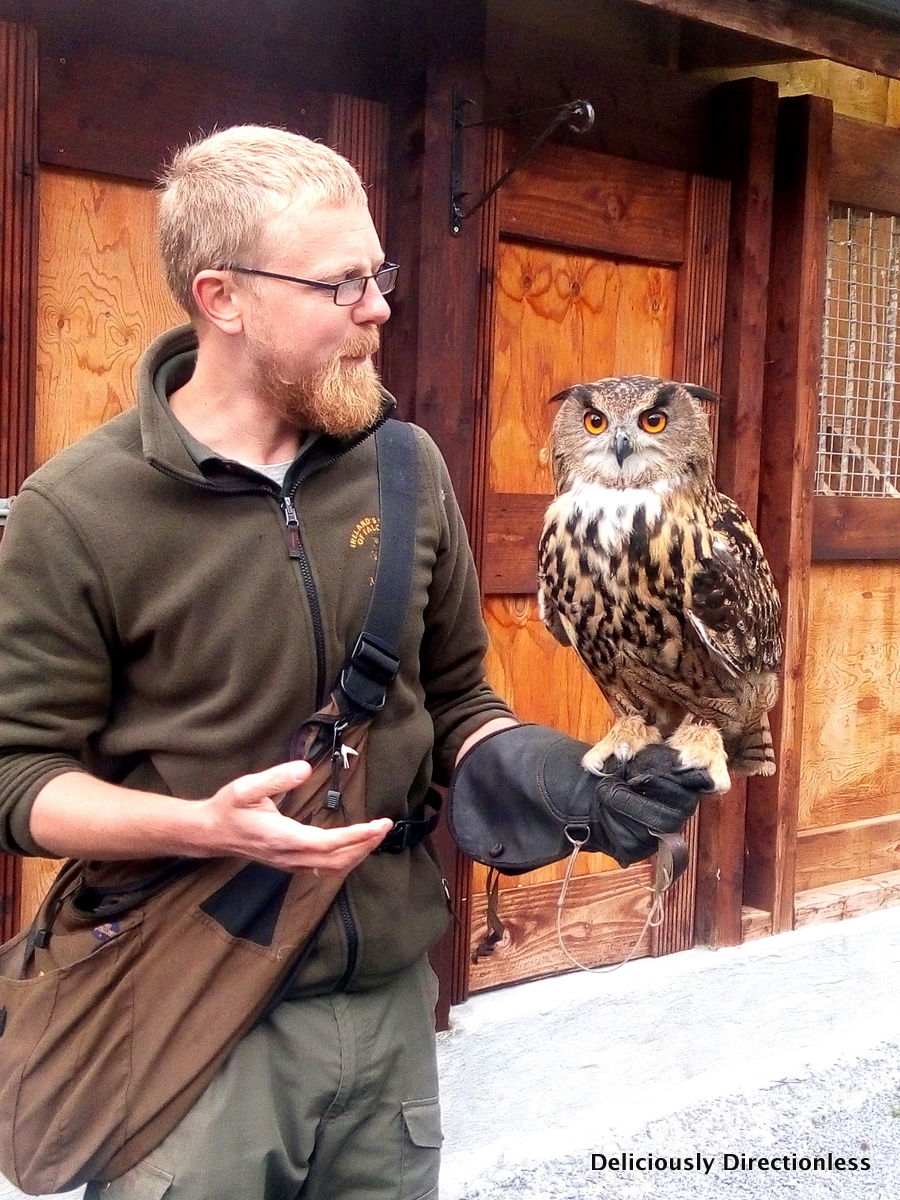 Next we proceed to the ‘bird cages’ – the entire periphery wall is lined with a metal fence, giving the birds plenty of room to fly about, without escaping. There are a few peregrine falcons and several Harris Hawks, with charming names such as Sonora, Swift, Milly, Aztec, Summer, Inca and Wilde.
Coulson explains that the hawks are taken for a ‘walk’ twice a day, either by one of the trainers or by visitors like me. “Their diet is carefully monitored, and we weigh the hawks before and after the walk, to make sure that they are getting the optimum amount of food”, he elaborates.
Soon I am introduced to Aztec, a three-year-old male Harris Hawk, whom I will be taking for his evening walk. I wear a thick leather glove on my left hand, which reaches halfway up my forearm. Coulson deposits Aztec on my gloved hand. The bird is on a ‘leash’ attached to his feet, and Coulson instructs me on how to hold it correctly. I expected Aztec to be heavier, but his weight hardly registers. Up close, he is a beautiful bird, with a brownish-black body, chestnut colouring on his ‘shoulders’, and a long dark brown tail, ending in white tips. He is already pecking away at my glove with his large, yellow beak. Then suddenly he lets out a shrill screech and starts flapping his wings – he’s raring to go for his walk. 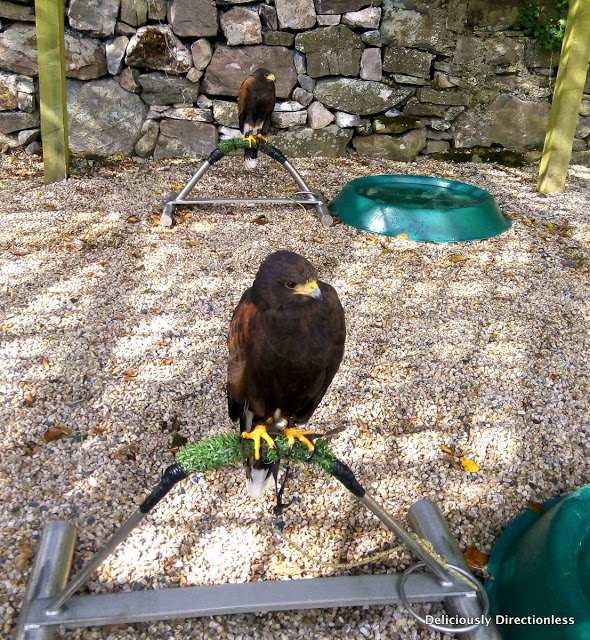 We head into the woodland, with Coulson explaining to me how to release Aztec. “Extend your arm fully and sweep it across your body”, he says. He then releases Aztec’s leash, I swing my arm as instructed, and away goes Aztec. It’s a thrill watching him spread out his wings and fly away into the treetops. Coulson opens the little leather bag he’s carrying, picks a small piece of raw chicken and places it in my gloved palm. “Hold your arm straight down by your side and close your fist”, he says as we see Aztec following us in great swoops up amongst the trees. Then I give the signal by raising my arm out front while facing Aztec. He dives down elegantly and comes to rest on my arm, tucking into the chicken in my palm.
For the next 45 minutes or so, Coulson and I walk further into the woods releasing Aztec periodically and then calling him back for his meal. My earlier apprehension has given way to excitement and a measure of fondness for the bird. My heart leaps with joy every time I hear the now familiar swoosh as Aztec lands on my arm.
Hands down, the best experience of my trip to Ireland!

Etihad Airways flies from Mumbai and Delhi to Dublin, via Abu Dhabi. The drive from Dublin to Ashford Castle (240 km) can be done in 3 hours. Alternatively, take a train to Galway and then a local bus service to Ashford Castle.

The rooms at Ashford Castle are sumptuously done up and many of them give sweeping views over the lake.  Alternatively, you can stay at The Lodge at Ashford Castle, a 19th-century country house annexe to the castle, offering a more intimate ambience (and lower prices).

A 60-minute hawk walk is priced at €80 per person; discounts available for groups. Details at http://www.ashfordcastle.com/estate-activities/falconry

Show me more!
Travelling in South Korea: An Experience with the Korean Police Force Spanish Delicacies to Try in Each Region
Scroll to top