At Host's Location near to vatican city.

Are you looking for places to eat in Rome on your special day? Or would you like to arrange a special surprise be it for birthdays, proposals, or anniversary celebrations in Rome? I would like to invite you to celebrate your special moments in Rome by having a gourmet fine dining experience that is different from what you would get at restaurants in Rome. You will enjoy a more intimate and private setting, with me as your private chef and professional wine sommelier. My girlfriend will bake her cake specialties, and we will both be at your service! Together with my girlfriend, we would love to share our passion for food and wine with you, get to know you and share some stories together. We hope to make your evening in Rome a special one! Also don't forget to ask about my famous home-made limoncello to top up your evening!

Sides: Radicchio with balsamic vinegar sauce OR Fennel salad with oranges and olives OR Salad with crab meat and almonds OR Mixed salad OR Cabbage salad with pomegranate

Dessert: Hazelnut cream Cheesecake OR Tiramisù OR Hearts of chocolate OR Cheesecake with ricotta cheese and pears.

The menu will also be paired with wine chosen by me!

I live a short distance away from the Vatican City and St.Peter's, in a beautiful, quiet and cozy neighbourhood. The way to my apartment is filled with cobblestoned pathways and beautiful old houses. As it is also on a hill, you can catch a glimpse of the Roman skyline, over the Vatican City.
In the summer and when the weather is beautiful, we can have dinner in my well kept garden where you can see and smell the herbs I will use for your dishes and the lemon tree that I use for my homemade limoncello! 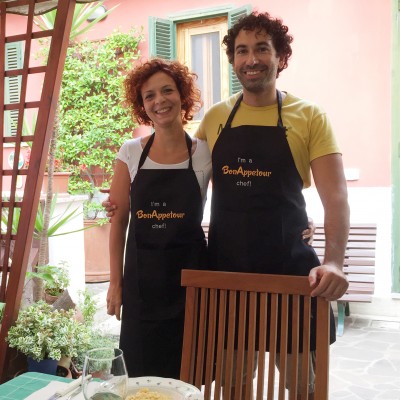 Hi, I'm Alessandro (Tony for my friends!). I'm a true Roman living very near the Vatican City and

Looking for a different diner experience our 4 days vacation group of 13 gained interest in the Bonappetour offer by Alessandro and Elena. The contact was quick and easy, Alessandro is very fast and precise in his answers. On arriving in their home we were surprised by a friendly athmosphere, good wines and fine dishes. Our hosts are enthousiast speakers on their thoughts on good food and wine, and also films. So we enjoyed what we were searching for in Rome: a different locally inspired culinary experience. Maybe next time we have the right weather to sit outside on the cosy terrace. Thanks for having us, Tony and Elena.

What an incredible experience, start to finish. Allesandro made everything so easy, from planning and customizing the meal, to providing a fantastic dining experience. If you have any doubts that this is "exactly" as advertised, forget them. Truly top-notch, authentic, and wonderful. Don't miss it! 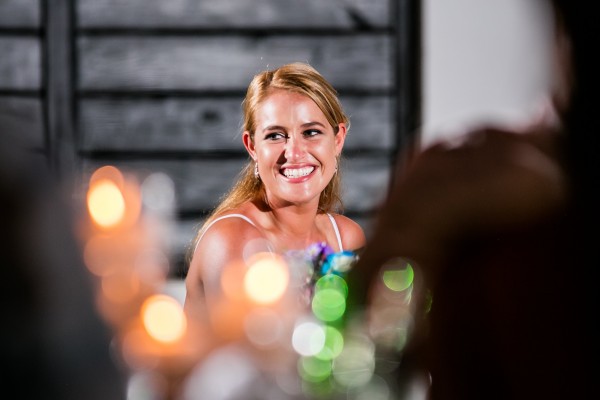 My husband and I did dinner with Alessandro and his girlfriend, Elena. The meal was unique, tasty, and well-portioned. Elena and Alessandro made great conversation throughout the whole dinner. We got to learn more about Italy, establish some commonalities, and they helped us find other places around the city to try out. We had such a great time - it was truly a unique experience. I would highly recommend Alessandro's wonderful meal and company.

Dinner with Alessandro was fantastic. It was a great experience. Not only was the food delicious, but Tony offered much great advice on where & how to enjoy the food of his home. 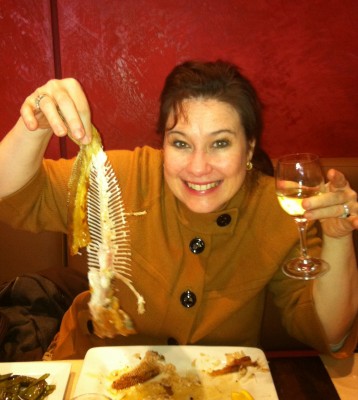 "Chef Tony" was very warm and welcoming and was very generous with his explanations and his Roman tips. His lovely girlfriend was a real asset to our conversation at the end of the evening, so it was a disappointment that although a place was set for her, she only joined us for dessert. On a personal level, we had a very nice time meeting them, and we think they are lovely people. As for the meal itself-- it was nice. I personally didn't find it to be at a "chef" level, but more like a good home cooked meal. The menu was nicely presented on a black board, and Allesandro explained the dishes to us in advance, which was nice, and he told us interesting facts regarding the Roman roots of the dishes. He served us Ricotta Stuffed Salmon, as a starter, a pasta dish, Linguine with Gamba (which was the best dish of the evening), and for the main dish, a pan friend snapper with cole slaw, which was his own personal recipe. For dessert, some home made Lemoncello, and a tart with apricot. The wine he served was a simple Trebbianno, with a sea-salty taste from where his family is from. It was a good accompaniment to the food. The were a few things that were a bit of a disappointment, however. First, I had asked for a beef menu, rather than a seafood menu, since my husband is not a seafood fan, so he was rather dismayed immediately. Also, we were served on a patio that could have been beautiful, but the set up was quite ordinary, and not how you would serve guests, unless you are family coming for a picnic or pot-luck style dinner. There was laundry hanging, and shoes laying around, and the table was set with plastic charger plates, thin paper napkins, picnic style silverware and a plastic table cloth. There wasn't any decoration. The set up was poor, so we were really counting on good company and good food, and when the girlfriend didn't join us until dessert, and he himself only ate the main dish with us, we were left without company for a good portion of time. I suppose this wasn't a real problem, but in our emailing each other, he asked if we would prefer our dinner with other guests, or with just him and his girlfriend, so we were expecting a certain atmosphere of company. I had replied to him that either was fine, so we were looking forward to having our dinner WITH them, instead, we ate his prepared dishes IN FRONT of him, while he talked at us, not with us, and his girlfriend worked in the living room where we could see her through the window. It wasn't exactly what we expected, and we felt a bit as if we were intruding. Additionally, because the chef was sitting down with us, watching us eat, it was a long time between courses and an extended dinner, (3-1/2 hours), even though the menu was quite simple. So here is my 1-5 review: I give the host a 4. He was VERY nice, and his girlfriend is also VERY nice and at the end of the evening we very much enjoyed their company. His tips and after event email was very nice. The Food: 3 First, I had been given a choice of seafood or beef, and I choose the beef menu, but we got a seafood menu. Second, the food was fine, but not at a chef level, which is what we expected from his write up. For example, the sauce on the fish tasted more of thickener, than of lemon, (not a mistake a chef usually makes), and the bread that he so passionately spoke about, was inedibely hard. The pasta dish and the dessert dish saved the day for me, but none the less, the value per euro was, in my opinion, not very high. Furthermore, I don't feel that he is of a "personal chef" level. Location and Atmosphere: 2 First: The location of his apartment is about 15 min by cab. He gave us very good and thorough directions, but the cab didn't want to take us up the hill to the address (small winding road), so I had to walk up the hill in my heals, which wasn't fun for me! Also, there were quite a bit of stairs, so if this is a concern, it should have been noted! Second, the patio in which we were served was not set in a very attractive way. Very plain and very cheap, where it could have been beautiful without too much effort. Third, using plastic charger plates, picnic style silverware and a plastic table cloth was really quite shocking. I feel that if it had been more of a socially rewarding evening for us, (especially since the food was just OK, and the atmosphere was dangled on poor), I think the aesthetics and the cuisine could have been mostly overlooked, because we did like Allesandro and his girl friend, and I think they have a good thing going, but it could definitely be spruced up a bit for the over 50E per person we paid. 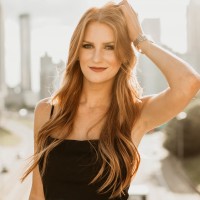 We had so much fun cooking an authentic and delicious Italian dinner with Alessandro. The recipes we made were amazing, we were so satisfied with the dinner and enjoyed learning old family cooking tips from Alessandro. Our conversations with him were so easy and he made us feel right at home. If we are back in Rome we definitely plan on cooking with our new friend Alessandro again. Thank you for making our visit to Rome so special and memorable!

Alessandro was a spectacular host! My friends and I participated in the vegan pasta making class and not only was the food delicious, we learned so much about the process. Alessandro was careful to explain everything thoroughly and even provided the recipes we could take with us to prepare the dishes at home. Alessandro was very personable and a great conversationalist. It was a joy to learn about his family, his career path, and tidbits about Italy in general. He even emailed us with many other suggestions and recommendations for activities, restaurants and areas to explore. We had an amazing experience, topped off by a shot of homemade limoncello! The only suggestion I would make, is to perhaps offer a light appetizer during the cooking. Highly recommend! Thanks so much Alessandro!

We had a lovely evening at alessandro’s home restaurant. Food was great and was paired with wines which were expertly explained by our host. We were joined by a couple from USA who we hit it off with straight away. Thoroughly enjoyable evening I would recommend this to anyone considering it. The evening ended with a taste of allesandros home made lemoncelli which was delicious.

We are always looking for ways to experience the place/ country as a local and cooking class combined with dinner in Alessandro house was a perfect choice. From day one - first email exchange - Alessandro shows he really cares about his guests and provide you with all the info you might need. Very patient and polite cooking teacher. Him and his girlfriend are very kind and interesting people and make you feel during the dinner like you are visiting your friends. I highly recommend the whole experience.

Myself and three friends had the pleasure of visiting Alessandro in his home for a great evening of food, wine and conversation The food was beautiful cooked, and we all enjoyed Alessandro explaining how the different courses were made and the ingredients contained The wines accompaning the food were all locally sourced and of great quality We were joined at dinner by two visitors from Israel who helped to make the nigh entertaining and informative We would highly recommend when in Rome to arrange a visit to Alessandro home We thoroughly enjoyed the experience

A truly Roman feast overlooking the Vatican City $52
Dining in a Roman Terrace $54
Best seafood in Rome: only Roman fish!!! Go aboard my braves! $63