My culinary principal is to create a variety of appealing and scrumptious healthy dishes that not only does good to your body, but also creates a healthy mind!I am a strong believer of Ayurveda, Yoga and Clean eating concept. While I had my full time job, my passion is always in food, both indulging and cooking. And one day I came across Bon Appetour, and I was so intrigued with its concept. It gives me the best of both worlds- where I could work-from-home (cooking), while allows me to earn from it! It was just perfect. Here's what you get in my class:-

Theory of spices and herbs, the powerful use of these spices and Ayurvedic properties
Understanding your body constitution type
How to eat according to body type
Ayurveda concept of Toxic

You will also receive recipe Handbook with all the recipes you are going to learn for the day. Hope it helps.

We have a variety of menus you can choose from:-
1) North Indian Menu
- Learn to make Indian Flat Bread Capati, one side dish, appetizer and a dessert Kheer

2) Briyani Menu
- Learn to make Vegetable or Chicken Briyani, Raita, one side dish and Appetizer

6) Ayurveda Menu
Let us SURPRISE you!
If you are not sure what to choose, then let us surprise you !

We are located at Dutamas, 5 mins from Publika Shopping Mall. There's plenty of visitor parking available, so if you are driving, worry not. If you are taking public transport, the nearest Komuter to our place is Segambut KTM station. 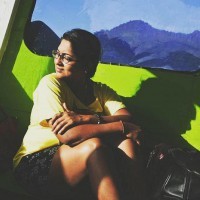 My name is Shamini, a working mom to 2 beautiful children. I've been always very passionate about

Let’s start with arriving at the gate, we were treated as if we were there to rob someone. I had confirmation paperwork with all the details and the security guards even called her to verify... It took us 10 minutes just for security to let us through to her building after requiring us to show our passports. Then we had to be escorted by security to her door... only to be met by Shamini who apologized that she had completely forgotten about our class. WHAT??? She had confirmed with me twice... even asking to change the time from 10am to 11am. Her reasoning for not remembering was that bonappetour didn’t send her a reminder... one would think that if this is what you do for a business that you would keep your own calendar. She offered to reschedule, however, we only had 3 days in Kuala Lumpur and the other days were already booked with other activities... We then had to be escorted by security back to the front gate. We had taken a taxi to get to her place and it left when we walked up to her apartment. Then of course we had to find a taxi right back to our hotel as we stood on the sidewalk in front of the guard shack. When the guard originally called up to her it would have been nice if she told us then that she had forgotten so we wouldn’t have lost our original ride. I have been assured by bonappetour that they will be processing a refund for the class but they have to discuss rather we will be refunded the taxi fare.

The First time I was at her home I loved the food so much that I decided to go back for cooking lessons and than again for dinner. She's so nice, her children and her home. Everything was perfect. I wish I could go back to Kuala Lumpur just for the food

Shamini's welcoming and warm personality coupled with her beautifully crafted meals is the perfect combination for a wonderful experience! I would highly recommend Sham to anyone who wants to experience Indian Vegetarian cuisine like no other =)

Sham's Indian cooking is one of the best in town. I just tried her South Indian Briyaani taali which came topped with lychee pudding and followed by masala chai as the curtain closer. Sham's cuisine not only serves as healthy food for the mouth, but as food for thought as well as she explains to the customers the background and benefits that lies behind every dish that is served. That helps us to appreciate the meal more as we savor on her sumptuous dishes. Sham has never failed to impress her customers with her splendid cooking skills and warm hospitality. Sham gives utmost attention to her customers and everyone leaves her kitchen with a unique experience vowing to return again!