My cooking course focuses on creating an ideal home-style learning environment that is different from most other cooking courses in Thailand. If you are thinking of taking a class on the last day of your stay, we will wrap up your journey to Thailand wonderfully! Learn how to cook healthy and delicious Thai food to surprise your family and friends at home as a gourmet souvenir form Thailand. Real hands-on experience.We has lots of fun activities that you can take it part in as well.

Nham Ta Krai
A native plant of Southeast Asia and parts of Africa, lemongrass is frequently used in cooking. It has a zesty flavor reminiscent of lemon, and adds a citrusy and bright note to curries and sauces. However, it has become more and more popular with Westerners not only for its eye opening flavor in cooking, but also for its health benefits and medicinal properties.

This grass is capable of growing just about anywhere, making it easy to grow a patch in your own garden or backyard. Lemongrass make a zesty, refreshing drink is highly satisfying both hot and cold, light lemony taste, with slight hint of ginger, and is know to life a sagging sprint, as well as aid digestion.

Krathong Tong means golden cup in Thai. To prepare the cups, a special brass mold with a long handle is used. Dipped in heated cooking oil and then into a egg-yolk, coconut milk as flour batter, the thin shells that form around the mold are fried in hot oil to create pleated golden cups


Laab Gai
Spicy Thai chicken salad, with a wonderful variety of flavors and textures. Use fresh herbs in this recipe, dried will not even come close! Use of boneless, skinless chicken, fresh herbs and no added oil makes this a very tasty low-fat dish


Tom Yam Goong
TomYamGoong is a spicy Thai cuisine, soured by lemon juice, salted by fish sauce, and heated with hot spicy chilies. This Thai dish is also a savory complement of Various Kind of Thai herbs such as galangal, lemon grass, and kaffir lime leaves served with chili paste.

This Thai cuisine delicacy is not only delicious but also nutritious as well. The dish contains protein from shrimp and fiber from other Thai herbs and ingredients of nutritional value. It's believed that Thai herbs can help stop the growth of cancer. The savory scent of Tom Yam Goong is often used in aroma therapy for its relaxing and curing effects in the treatment of some diseases

The traditional dish contains beef cut in thin strips, kaffir lime leaves, coconut milk, panaeng curry paste, palm sugar and fish sauce. The dish typically contains thick coconut milk and will have very little other liquids added (hence a dry curry). It is generally milder than other Thai curries. Tofu is often used in place of beef for the dish. 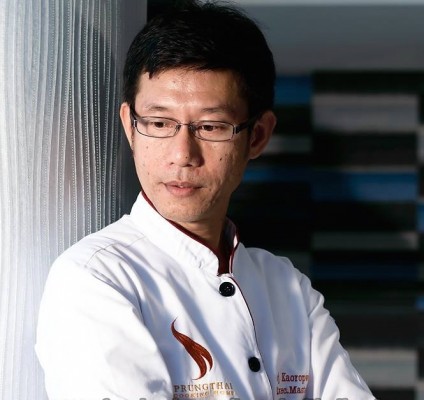 I run the "Prung Thai" Thai Cookery School, which is one of the best in Thailand, and we offer