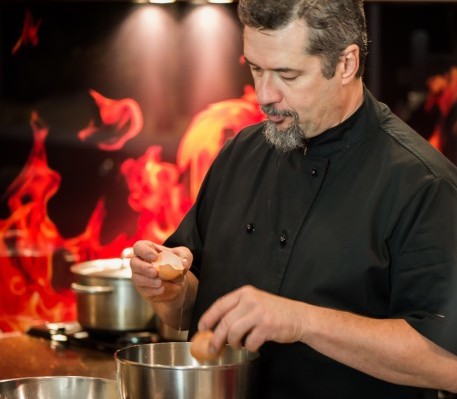 #Cooking
#Landscaping
#Growing vegetables fruits and herbs in the kitchen garden
#Taking care of Chickens and trout in the backyard Watching movies.Listening to music.

Aix en Provence. A 6-year old boy. A resolute mission. To be a Chef. Thankfully for many of us, Pascal honed in on his vision and nurtured it to fruition. It’s odd he decided to be a Chef, because it wasn’t like he was helping his Mum in the kitchen. However, being born in France, taking food seriously, is taken for granted. France Pascal kick-started his career at age 15 in a restaurant called “Le petit Ruinais”, close to the city of Vienne, with the great Chef Andre Parra. He worked at the restaurant diligently every school holidays. Andre Parra moved to “L’Hermitage Corton (2 Michelin stars) close to Beaune in Burgundy, right in the middle of Corton vineyard. It was here that Pascal did his apprenticeship for two years. A few months into working, the Pastry Chef suddenly left, and Pascal found himself leading the Pastry section. Pascal moved back into Aix en Provence and as compulsory at that time, joined the army. After completing his stint in the army, Pascal worked at “Le Mouscardin” in St. Tropez (3 Michelin stars), which was catered to and frequented by the internationally rich and famous. A little over 2 years and Pascal decided to come to Australia. Melbourne A friend owned a restaurant in North Melbourne called “Berard Seafood of France” and was looking for staff. Just two weeks of living in Melbourne and Pascal decided to stay. After the demise of that restaurant, he worked at “Fleury” in Toorak (2 good food hats). Working here led to a string of opportunities including catering for events for Bob Hawke and Paul Keating, launch events for Sony Records, and restaurants like The Walnut Tree, The Lyceum Club, The Metropolitan and Café Chantilly at Prahran. Pascal also undertook a mammoth task with Spotless Catering at the Commonwealth Bank head office, which catered to 600+ clients. He also did functions for the Premier’s department, which at that time was Jeff Kennett. A 2.5 year stint at “Jean Jaccques”, St. Kilda was important in more ways than one. It was here that Pascal met his sassy and stunning wife, Kiran. Being a Chef is more than a job. It is a lifestyle. When his first-born, Shayana turned one, Pascal felt he needed to invest more time in watching his little one grow. Spending 18 years away from home, in the confines of a kitchen, was not part of the plan at this time of his life. He bought a franchise with Jim’s Mowing, which allowed him the flexibility of time and schedules. Pascal is immensely earth-conscious and believes in sustainable living and growing. So whilst, gardening would have started as a hobby, it is now purposeful mission for Pascal. He has a Certificate 4 in horticulture and a Certificate in Permaculture Design. After 16 years, he still enjoys working his way and weaving his magic in his backyard growing herbs, vegetables, looking after his chickens and trout. Well, good for his family and friends. And they aren’t complaining…they get canary yellow eggs, sharp fragrant herbs, fresh organic produce which can’t get any more local…on their plates! It can be on your plate too…

The Gourmet Frog provides not only insights into gourmet cooking and French cuisine, but allows you to participate in the process and share the ... 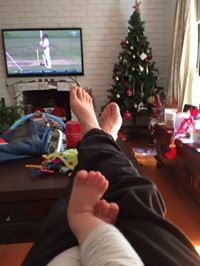 I had a great time and the food was excellent!Def picked up some tricks of the trade and Pascal's easy going style made it relaxed and fun! Worth going to for anyone looking to combine a unique night out with great food and learn some new culinary skills!

We had a great meal with Pascal. Delicious, healthy food, sustainably sourced, warm inviting environment. We even learned a few tricks for our own cooking. Would highly recommend for a night out and a change from the usual restaurant experience.

A master chef with delectable menu to offer. Pascal has created the atmosphere of Southern France at his home in Melbourne, a foodie's paradise. His home restaurant provides the best of his home grown organic vegetables on one's plate, the best cuts of meat cooked with extreme care as well as the delicious desserts. Pascal's deep passion for his cooking skills has reached its zenith. Superb chef with a cute smile.

The luxury of having a pastry chef, whose reputation of having worked in Michelin star restaurants precedes him, cook a gourmet meal specially for you in the cool, sassy and cozy environs of his own home, is not an opportunity you take lightly!!! The Gourmet Froggie, a.k.a., Pascal provides such a complete experience...classic yet contemporary French fare using great local produce, matching wines, warm hospitality and a clipped French accent....perfect combination for a super evening!!

A loss for France but a BIG Gain for Melbourne.Have had the pleasure of knowing Pascal personally and professionally for about 19 years.His passion and love for good food and wine is undiminished.His simple rustic French country style fare ,without any pretensions can give any hatted or starred establishment a run anyday.The oomph,the pizzazz and the ooh la la all rolled into one .Just writing this is making me drool with all memories of great feasts shared at their table.Bon Appetite always